And on we hurried

The café was closed in Navarette, closed despite its advertised opening time of 6 am.  So hungry, we headed out into the moonless trails; although we made tracks along the route by street light and our back lights, by the time we reached the edge of the town and lost the lights that lit the road, it was too dark to continue safely.  We headed onto the Camino, picking our way gingerly on the rough ground.  There were no pilgrims ahead of us on the route, Navarette not a place that many had stayed.  Later, still in the darkness, we could hear the distant click clack of poles but in this quiet, sound travelled far.

As the sun rose, it bathed the sky behind us in hues of orange and red, breathing fire over the church spire and the low hills.  We followed tracks and trails and roads too today; the N120 was busy for a while and that was unpleasant but as the early rush to the bigger towns subsided so the roads quietened to an odd car here and there.

We met a French lady travelling alone on her bicycle, making the journey to Santiago; she was travelling much further than us each day, staying on the roads and she told us about the hills we would encounter on our next stage!  Not something I wanted to know about that early in the morning.

Arriving in Najera, we failed once again to get a decent breakfast and feasted on the free cakes that the lady in the café gave us apologetically.  It was a real working man’s café and delicate croissants didn’t really fit in here!

Hurrying through Najera, we continued on, the villages, always on a height, charming in their medievalness!  At Santa Domingo, we finally stopped and found breakfast; it looked like a town to be discovered but it was already 10.30 and the heat was rising.  I am becoming increasingly tired but we couldn’t stop.  The N120 was busier once more with articulated trucks squeezing us against the barriers so we took the trail; when it runs so close to the road, we could nip on and off it easily.

Look to the skies

It was on the trail that I spotted a true pilgrim sign – a cross in the sky.  Though not religious, it seemed so fitting on this day to see this and it urged me onwards.  What other sign would a pilgrim need, no matter their motivation for being on the Camino?

A day of signs 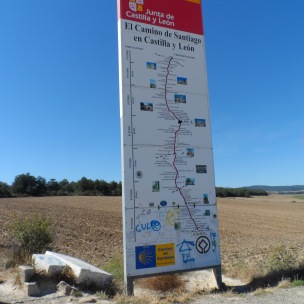 We stopped in Redecilla del Camino for lunch and listened to a German pilgrim recount her story of being ‘flashed’ at on her travels.  She had a whistle which she blew and frightened him away but she told of many stories of girls journeying alone who had been grabbed by men waiting in cars on the side of the Camino.  Very sad, very frightening for those who chose solitude on the path.

The welcome in Belorado was one of the best and we were checked into El Caminante, an albergue with double rooms too (5€ a night for a shared room).  The people here are some of the most hospitable we have met – and, they delighted in my broken attempts at Spanish.  I have never felt so good trying a new language as I have today when I asked for ‘un boli’.  With my new biro in hand, the lady I bought it off taught me some other new Spanish words to add to my small but developing list!

The Church in Belorado

Not sure what the crates were doing on the building

Art abounds on the camino

The evening entertainment, Little Bo Peep and the Naughty Sheep