Not sleeping in Burgos

There are many idyllic locations to choose for a night on the Camino – traditional albergues in picturesque medieval towns and villages, monasteries, campsites but arriving in Fromista at the end of a long day we picked….a railway siding.

But to return to the beginning of day 8 on the Camino….

Burgos did not sleep.  Our hotel in the centre echoed with its partying until the early hours.  As we packed our bikes up to leave in the darkness,  ambulances’ weary blue lights flashed as they headed toward casualities, revellers wandered the streets, kicking at the clattering cans littering the way and drunks sung words that only they understood.  The night was strewn everywhere, the empty bottles, the broken glass, the litter, the bodies – it must have been some party!

But pilgrims rise early and get moving; it was busy with the familiar click clack of sticks all feeling their way for the yellow arrows out of the city.  As we frequently found,  the route onto the Camino from a city can be tricky to negotiate but with own small map and tonight, a full moon, we made it to the park gates and out of the town.

Enchanted by the Meseta

This was to be our longest day yet, our ambition to cover three walking stages from Burgos to Fromista.   An ascent near the start disappeared in a blur; for the first time we were on the Meseta.  Endless field after endless field of corn; the unchanging, unshaded landscape may prove tedious for the walker but for us, as cyclists, there were enough rocky crags to hold our interest, along with the longish ascents and descents.  The kilometres flew by.

Today it rained for the first time, a welcome relief with the accompanying cloud cover but the sudden shower as we approached Castrojeriz saw everyone, walkers, cyclists and even locals bolting to the first café in the village.  It was short lived, long enough for the café owner to make money and the pilgrims to share stories!

Promised a stage with few steep ascents ‘one more, that’s it for the day!’, we came out of Castrojeriz to the depressing sight rising ahead of me.  You could see peregrinos on the hill, at the bottom, at the top, in the middle.  Most ascents appear steeper from a distance but flatten as you approach.

This one did not; it stayed at the same stubborn gradient though I was almost at its foot!  I started climbing on the bike but was soon off, counting to 10, stop, 20, stop, getting to 100 before stopping, a sign the gradient was softening!  A group of cyclists we had been playing tag with for several miles began to overtake me; like an advancing army, they stayed determinedly in the saddle (an aside here:  boys on bikes passing girl pushing bike will try to stay on to the point of shredding muscle, just to show their prowess.  I have had a lot of experience in this, believe me!)  One of the guys was playing music, The Walk of Life (Dire Straits?) – I managed a bit of a jiggle and shared the usual gesticulations about the steepness of the gradient!

From the top of Alto de Mostelares, we could see how far we had come.  Such a satisfying feeling being at the top, looking down on those who are yet to come!

A very, very steep descent on a dry concrete path began an enjoyable swoop down and a well earned 20 minutes of standing on pedals, resting a saddle sore behind!  And to top it all, that was the last climb, as promised!

Location….one of the criteria for choosing a bed for the night

Sheltering from the occasional shower we headed towards Fromista, chasing a thunderstorm.  The landscape so flat, it was like watching a storm over the oceans, fork lightning cleaving the blackened skies.

At Fromista we found the albergue quickly.  I wouldn’t have chosen this one myself; not the most salubrious of locations, in a railway siding.  We wandered the churches and the streets of Fromista but my appetite for visiting tourist spots in the burst of 30°C afternoons has diminished as my legs, butt, neck and back become increasingly stiff.

Though not a preferred location, the food, wine and conversation made this evening one of the most enjoyable, sitting by the deserted railway line, watching the occasional train thunder past, and the storm rumble in the distant skies. 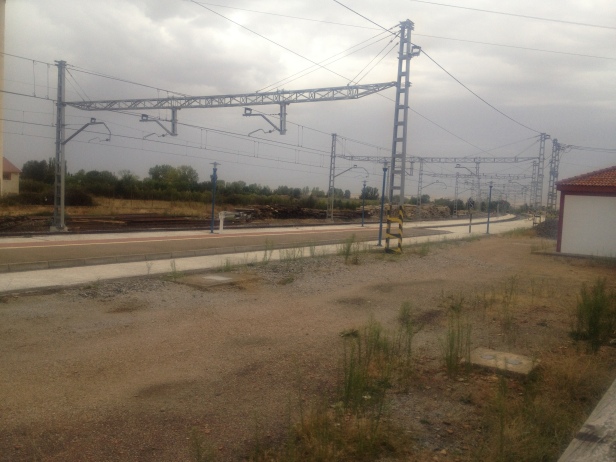