The guy looking after the visitors at the bridge at Carrick-a-Rede asked me if I was going down.

“No,” I said, looking way down to where the bridge was swinging over an iron-grey sea.  Regular readers will understand that I have this horrific fear of heights; sometimes I can challenge the fear and sometimes not.

“I don’t blame you!” he replied, laughing, as I backed rapidly away.   He didn’t inspire confidence and although frustrated at my own lack of courage, I know that sometimes, this girl just, simply, can’t.

I am a National Trust member, thanks to my partner’s insistence.  Which meant that I had a choice to go or not to go on the rope bridge and at least I was able to have a look without it costing me money.    Although, the guy did kind of suggest that I could get my money back, had I paid.

It wasn’t the bridge itself but the steps down to it that put me off; walking down the steep steps to the bridge, looking out over nothing but sea.  No thanks! 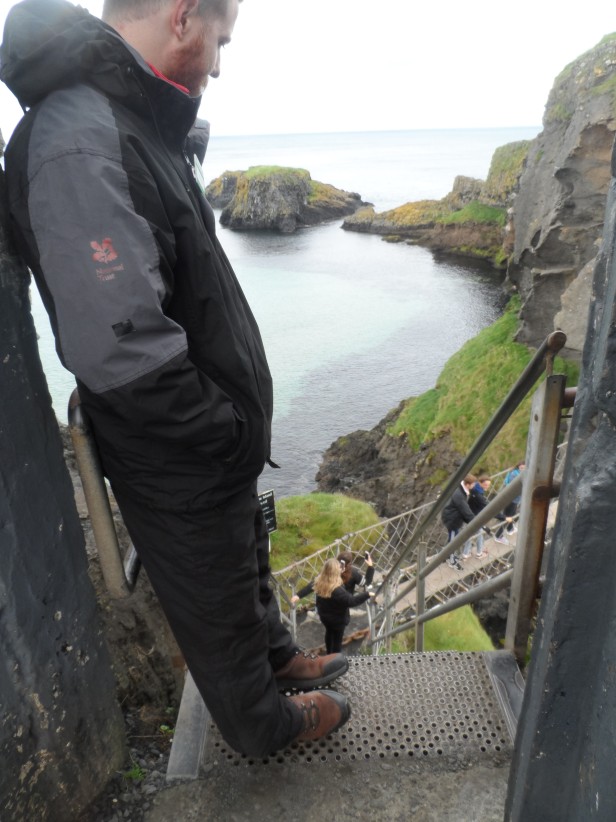 And I was happy enough to watch everyone else cross it.

After the excitement of the not-crossing, we meandered along the footpath from Carrick-a-Rede to Ballintoy harbour.  There was an extreme marathon taking place and the path was churned up by the pounding of multiple trainers.

After another great bit of fresh baked cake, we played on the rocks for a while, fascinated by the Game of Thrones reenactments;  Games of Thrones enthusiasts, dressed up carrying swords, swarmed amidst the exhausted runners.  I felt sorry for the runners heaving themselves up and down the road to Ballintoy, dodging Throneys and cars and tourists who didn’t seem to notice their effort.

But as we left Ballintoy, another coach was pulling up and unloading its Throney cargo; this time they were not dressed but carried their swords and helmets, buzzing with the excitement of being in Thrones country.   But we headed back to the bus and then for home, saying a sad farewell to a beautiful place.