It’s been a while since I have been home from my trip to Rajasthan but with an annoying illness following my trip and then Christmas, it has taken some time to sort out the media!

Below is the map of the route we took, starting in Jodphur.  It was an amazing way to enter the country; the airport was unbelievably ornate.  As we touched down onto the runway, we felt already like we were heading into a country rich in heritage and culture. 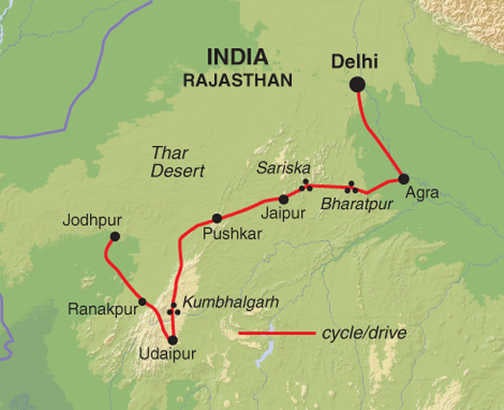 The country is definitely worth a visit, friendly people, great food and a shock of colour and sound everywhere.  Diwali festival was full of excitement and noise of the firecrackers, more colour, more food and very gracious hosts in Bharatpur.

Through all the villages which we cycled through everyone wanted to know who we were and just join us, some to stare but the children tried to chat to us and see what we were.  Cycling was definitely worth doing in India.  Having a route planned through the small villages meant that the roads were a bit quieter but even so, generally the speed on the roads is reasonably slow and you can guarantee when someone is coming past you by the loud blast from the horns.  It was very useful!

Udaipur and Kumbhalgarh were definitely two of my favourite places and especially Udaipur with its lakes and the animal sanctuary which we visited.  Look up Animal Aid  as they do some amazing work; with all the dogs and cows roaming across the increasingly busy multi-lane roads, more animals are going to be in need of assistance.