It wasn’t until we got to the gate at the airport that I found out I was going to Budapest for my surprise weekend.  So excited, I was about to add another country to my list!

It is 25 minutes from Budapest’s airport to the Hotel Hungaria City Center where we were staying.  And the taxi driver talked non-stop, telling us places to visit in the capital, which taxi company to call (his, of course) and he scribbled directions on a map – I am not sure that he knew he was still driving at the time – with locations and the places he suggested not to miss.  I looked at it the following morning and sadly, his hard work  had been wasted.  The scribbles were indecipherable which was probably not that surprising, given that he was still driving.

As a surprise weekend, I had done no research about places to visit so it was onto Trip Advisor to find out what to do in Budapest (with of course, the odd flashback from the taxi advisor).  And so it was we began our journey to the Chain Bridge over the River Danube.  But which way was the river?  Arriving at night, it felt difficult to orientate ourselves and the tourist map didn’t seem to be helping.  So walking was ruled out in favour of the Metro which ran beneath our feet.  Now that was easy!  Keleti Palyaudver to Kossuth Lajos ter on the red line (no 2) was only four stops which took us right to the Parliament Building and the river.  The Metro is 350 HUFs for a single ticket and the guards were helpful, showing us where to validate our tickets.  The Metro here was clean, friendly and uncrowded; the only downside for me was having to negotiate the down escalators which run at an incredibly fast rate.  Getting on without falling flat on my face at the bottom took some getting used to.

We milled about on the Buda side of the river; there is so much to see here but be careful! Buses use these roads and being electric, you can’t hear them coming – not ideal when you are taking photos.  We were, needless to say, a little bit surprised when a bus driver glared at us from two feet away! 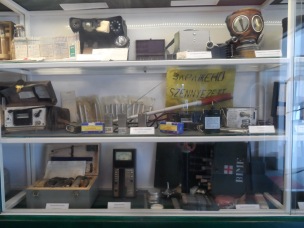 There are some interesting exhibits in the musuem 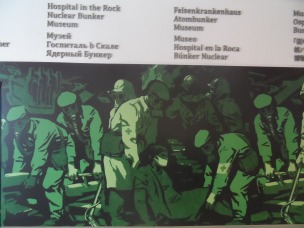 Still alive, we went on a tour of the Hospital in the Rock – a hospital/nuclear bunker that was well used in World War II and in the cold war following.  The price is 4000 Hufs (only 2000 if you are under 26) and the tours take place on the hour.   You have to go on a guided tour; it was interesting seeing the wax works models and scenes of the hospital in ‘action’ as well as hearing about its history.  I guess, having grown up during some of the years of the Cold War and with the threat of nuclear war very much in the minds of my generation, it interested me more. 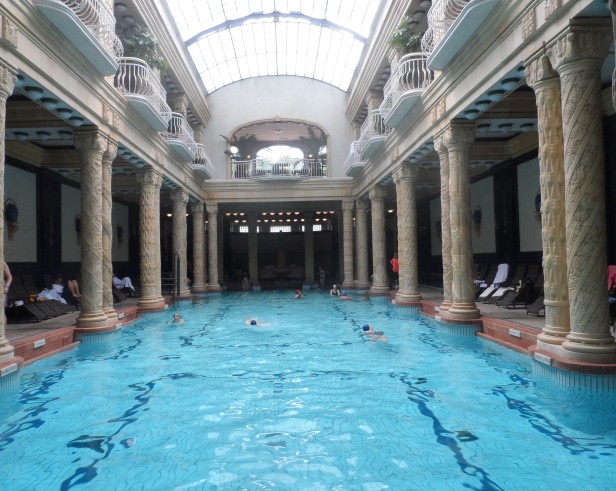 Hungary has more medicinal spas than anywhere else in Europe and it seemed a ‘must do’ to visit at least one of them.  The taxi driver had advised us to go to Rudas Thermal Baths which was originally built in 1550.  If you go, check your days on their website as there are some days that are for men and some for women. 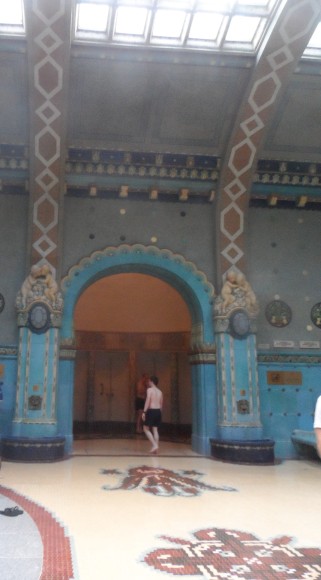 Speaking to Tourist Information, we opted for the Gellert Baths.  Both of the these spas are very close to each other; we preferred the look of this one.  Gellert is a gem.  Architecturally and decoratively very interesting, there is a sense of stepping back to grander days.  Inside there are three thermal pools indoors and one outside, swimming pools indoors and out (which has a wave machine) as well as steam room, sauna and cold plunge pools.  After walking 10 miles today, the spa felt like a very good idea.

That evening, we got a recommendation for a restaurant called Huszar, a restaurant which served both traditional and European dishes; from the outside it looked fairly run-down and I wasn’t keen but that only disguised the charm and atmosphere that was to be found inside.  Live musicians played next to our table, probably because I looked at them encouragingly!  Perhaps try not to fall for the “Would you like my CD, lady?”  At 5000 Hufs….

Check back tomorrow for some more delights of Budapest…..

3 thoughts on “The Surprise is Budapest”